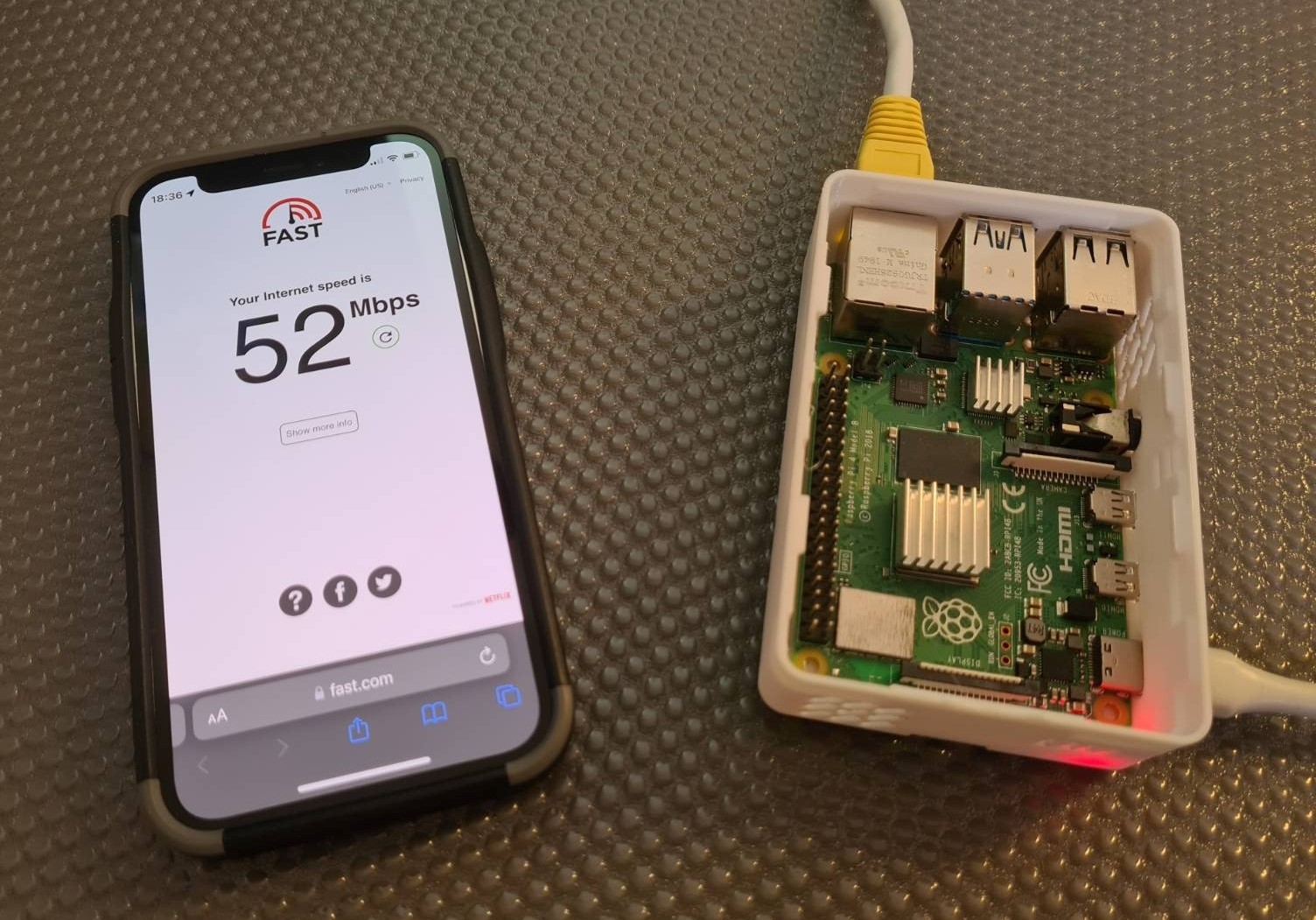 UPDATE October 2022: Raspberry Pi prices have significantly increased due to short supply. They used to make more sense as machines for basic servers, though now you might be better off using an old laptop or mini computer instead of the Pi.#

The guide applies the same for (basically) any PC running linux, just keep it in mind!#

For this project, I wanted to test the feasibility of running a Raspberry Pi as an access point. Another reason why I wanted to build it myself instead of buying an access point is because part of my house practically does not have any WiFi signal, and it becomes a problem when using mobile devices. Since I already had a raspberry pi with wireless capabilities, and wanted to learn more about how to set up an access point, not only is it a zero cost solution for me, but I get to learn in the process.

It turns out, if you have a Raspberry Pi that has on-board wifi, you have everything you need to build your own wifi access point! In fact it could be any computer with a wired connection and a wireless card, but the pi is compact and consumes very little power, making it a plus for running 24/7 and not just as a test. In the case that you are using another computer that is not the Pi, then you will need to see if its wireless interface can be used in AP mode.

I found some tutorials online on how to do this, but none were fully what I wanted or were incomplete, so I decided documenting the process for future reference would be helpful.

Here is a diagram explaining it better: Setting up the Pi#

For this tutorial you will need:

You can also get a kit like the one here: https://amzn.to/3BMtZTQ

If you already have a pi, great! If you don’t, for this project I would not get anything with more than 1GB of RAM, since for this application it will most likely not make a difference. Just get the one that has integrated wireless, or get a wifi dongle in case it does not.

Firstly, install the OS on the pi. For this I use the official Raspberry Pi Imager. I suggest installing a lightweight, purpose built for the pi OS. For that I went with Raspberry Pi OS Lite 32 bit.

Plug in your SD card to your PC, select the OS you want to install, select the SD card that you plugged in (make sure it is the right one!).

Before you hit write, check the settings and select “enable SSH” and set a username and password.

Click save and hit write. Let it write and ignore any file explorer windows that may pop up.

Connecting to the Pi#

Plug your sd card into your pi, and connect the ethernet and power cables. Wait a minute for it to boot up and find its IP address. You can do that by visiting your router’s configuration site or with software like Angry IP scanner. If you don’t know what your router’s IP is, here is an excellent article going over how to find it. Once there and logged in, check the connected devices on your router’s web interface. For my router (using OpenWRT) I navigate to 192.168.1.1 on my web browser and it shows up on the homepage:

Also make it static, in my case by pressing the “Set Static” button. You can usually find the IP and settings guide for your specific router from a quick google search including your router and your ISP’s name (e.g. verizon router set static IP). A list of common ones.

Once you have the IP of the Raspberry, ssh into it. If you are on mac or linux, you can use the following command from your terminal:

Where <ip-address> is the IP of the Raspberry Pi. If you are on windows, you can use software like Putty, insert the pi’s IP into the address box and click connect. Type yes when prompted to.

The password is the one you set up during the imaging process. Now update the pi using:

This will take a few minutes. Once that is done, reboot the pi using:

Wait a minute for it to come back up. Once you connect to it again, you can move on to the next steps.

In order to see that the wireless interface of the Pi is working and detected correctly, be it integrated or a wifi dongle, we can run the iwconfig command to see what interfaces with wireless capabilities are available.

See that the wlan0 interface has some output specifying its information, while the others do not have wireless capabilities. It’s important that it shows up. If it doesn’t, which is more likely to happen if it’s a dongle, check if it is connected properly or if it needs specific drivers.

To ensure the wifi radio is not blocked, run the following command;

This part covers installing the packages and configuring the necessary files to use the pi as an access point.

The main program that will handle the configuration and running the access point is hostapd. Hostapd is a daemon process (runs in the background) that enables a network interface card to act as an access point. It is analogous to what your phone uses when you set up a hotspot. Install it by running:

We also need to make sure this service is enabled for when we restart it, and by default it is masked out. Unmask it and enable using the following commands:

In order to create the network bridge, we will configure the system daemon that manages network configurations: networkd, or network daemon. This program runs in the background, and is configured by adding files into the /etc/systemd/network/ directory. Three types of files are used, and these are simply differentiated with their extension.

To configure our bridge, we will create a netdev file, giving it a sensible name for its function, for example bridge-br0 for the bridge we are defining:

And fill it with the following contents:

With this we are creating a new virtual network device, with the name br0 and of type bridge, but we haven’t bridged to anything, just defined it.

The next file we need is a network file, which will actually “connect” the br0 interface with the eth0. Create it as follows:

And fill it with the following contents:

This rule is saying; find the eth0 interface, and bridge it to the br0 interface. Notice that we haven’t connected the wlan0 interface to anything. This is because the access point software will add the wireless interface wlan0 to the bridge automatically when the service starts. This only happens with wireless interfaces.

Finally, enable the service with the following command, so that it uses the configuration files we just defined on reboot.

The other configuration that we need for hostapd is the configuration for the access point itself. This includes the name, password, and interface to be used (wlan0 in our case).

Open the file with the following:

Hold on! This configuration is given as base, though it can be improved depending on the wireless card you have. For the Raspberry Pi 4, the one I am using, we can see from their website that it supports 2.4 GHz and 5.0 GHz IEEE 802.11ac wireless, which means we can configure hostapd to make use of it, allowing increased speeds. If your card supports it, you can add the following lines to the file:

And replace the hw_mode parameter with:

If you switch to 5GHz mode, you also have to switch channels. There is a channel=0 option that should automatically search for the channel with less interference, but I could not get it to work. So you will have to select the channel manually. To do this, run the following command:

The output will be long, but you want to find the part labeled “Frequencies”. If the wireless interface can work with 2.4GHz and 5GHz, there will be 2 sections named “Frequencies”, go to the bottommost one under “band2”:

I suggest choosing a channel that does not have the no IR description (for example 36), since this means the wireless device needs to scan to see if the frequency is in use first, and it can be unreliable.

If you want to read more on configuring the /etc/hostapd/hostapd.conf file you can do so at the gentoo wiki. Their examples were used as a reference when making this guide.

When you connect a raspberry to the network, by default, it will ask the DHCP server (usually the router) for an IP address. This address will be given to the interface that you used to connect to the network, eth0 in our case. But this is not the behavior we want in the case of an access point. We want the bridge interface to have an IP, but not the others. We have to tell the raspberry that it needs to ask for an IP only for the bridge interface. We will use the /etc/dhcpcd.conf to configure this:

Add the following line to the beginning of the file. This tells the raspberry to not ask for an IP for these interfaces.

Next is configuring DHCP defaults for br0, by adding the following line to the end of the file:

We are almost done! Now it’s time to reboot:

After a minute or two, the raspberry should come back up and the wireless network name you specified before should be available when you search for wifi networks on a wireless device, for example your smartphone.

As you can see the speeds are pretty significant for a small machine like this, and since I managed to run it in 5GHz mode the range was substantial as well. It is not braking any records but now I can have this access point running on one side of the house that before got no signal at all! I call that a win!

As an Amazon Associate, I earn from qualifying purchases.